I just wanted to post a quick link to the fantastic work of Sculptural Illustrator Amy Michelle Downey over on STEAM POWERED FISH. 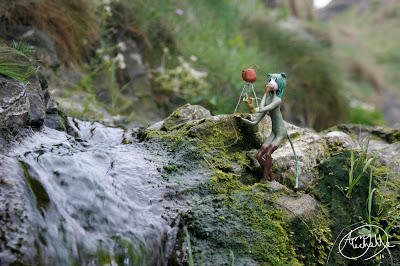 Marsh Walker
She creates some really unusual illustrations by combining three dimensional models and photographing them in a naturalistic setting.

I must admit I havent seen anyone else who produces anything similar so please take a moment to take a peek at her site!

All the best!
Posted by SpacecowSmith at 09:17 No comments:

Our university degree show starts tomorrow and everyones most welcome to come and take a peek!

Heres a link to the official WEBSITE for those interested. Open between 10am and 4pm between Thursday and Sunday, theres loads to have a look at ranging from Animation to Fine Art, Illustration to Graphic Design and Film.

All the best!
Posted by SpacecowSmith at 23:04 No comments:

Heres a quick link to my model making showreel:

All the best!
Posted by SpacecowSmith at 10:01 No comments:

Email ThisBlogThis!Share to TwitterShare to FacebookShare to Pinterest
Labels: Showreel

Well at long last heres a few pictures of the Hercules maquette I have been pottering around with for the last couple of months: 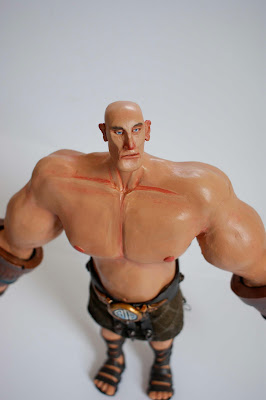 Hercules!
I have built him to be somewhat modular so his head and hands can be removed and replaced at will with the use of some small but powerful magnets!

Heres a picture of him with an alternate and more hairy head: 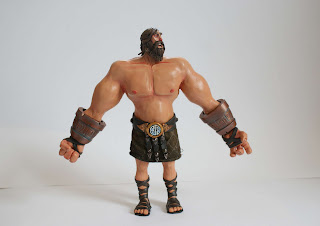 Angry Herc
The hands are also seperate and click on and off with ease: 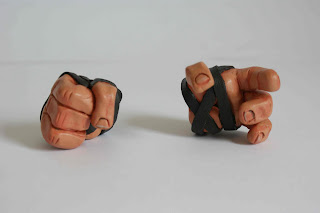 Crushing Hands of Hercules!
Standing at about 12 inches tall and weighing a surprising amount, Herucles is without doubt the biggest maquette I have created thus far. Made from a skeleton of aluminium wire, Milliput, Super Sculpey, fabric and leather, hes also quite complex. 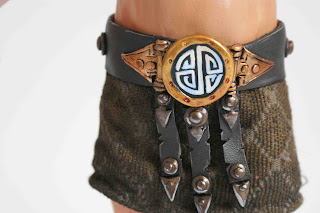 Hercs Girdle!
His kilt/skirt is made from some fabric I got from the Worcester Resource Exchange and dyed with some acrylic paint while his belt is made from some pieces of leather, again sourced from the WRE. The detailing was sculpted from some Greenstuff modelling putty and then painted.

The fabric itself has a ring of aluminium wire running around the inside which allows me to pose it and give it a slightly more realistic look.

I still have quite a lot I want to do with him as I have a load of variants designed and the modular head and hands should allow me to have a go at this without too much difficulty.

To speed up this process a bit I created a press mould of his noggin which would allow me to quickly create some more heads that will be getting worked on soon! 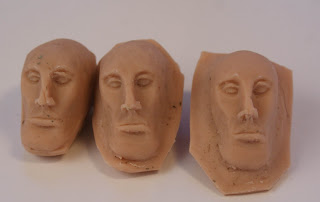 The Heads of Hercules!
The next stage will be to add a lion skin cloak to his outfit but it will have to wait until after the degree show now!

In other news I am now on Twitter so you can follow my inane jabberings there too if you wish!
All the best!
Posted by SpacecowSmith at 08:24 No comments:

Heres a couple of pictures of the nearly completed Space Cow! 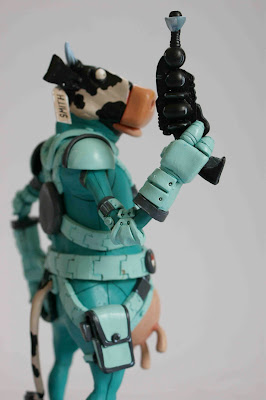 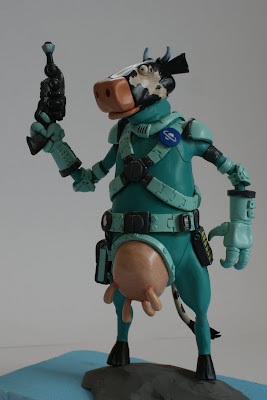 Space Cow!
Armed with a large ray gun and wearing a retro space suit, the Space Cow bodly goes where no cow has gone before!

I still need to make her a rocket pack and proper base but she is definately getting there!

All the best!
Posted by SpacecowSmith at 10:20 No comments:

Just a quick update with another rusty robot, this time the Demolition Robot: 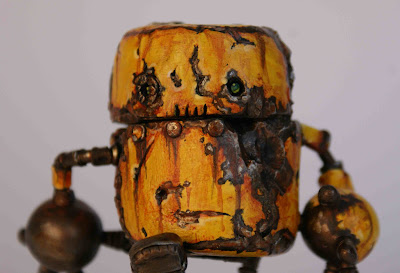 Once painted a jaunty yellow to make it more visible, the Demolition Robot has seen better days and is heavily patched and chipped. Despite this he is a cheery sort, especially as his degraded engine has been recently replaced with a steam boiler allowing him to brew a cuppa while on the job! 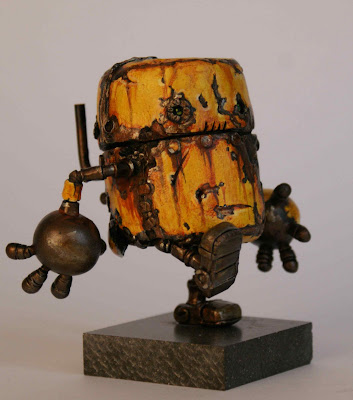 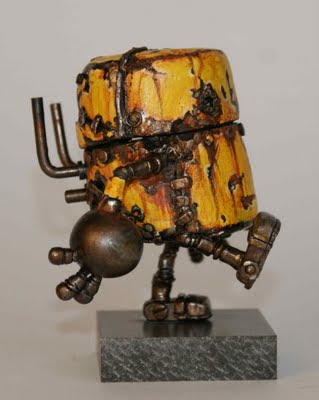 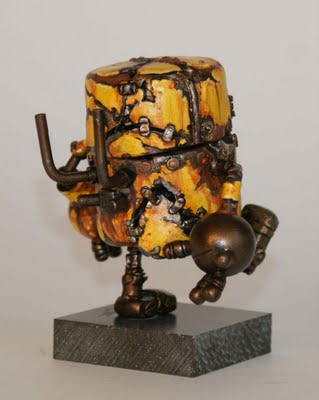 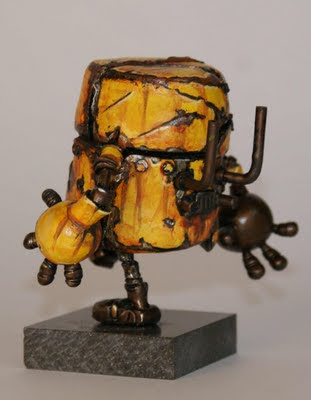 Demolition Robot Ho!
In keeping with the giant abandoned scrapyard which the other robots inhabit, the Demolition Robot has been required to patch himself up, including a rather botched attempt at welding his own head back together.
Constructed out of a mixture of Super Sculpey, Green Stuff modelling putty, barbeque skewers and plastic tubing I must admit I got a bit carried away with the painting but think he came out rather nicely!
I have actually used an earlier robot to cast a basic body shape mould and then pressed in some sculpey to make the body which does save a little time!
All the best!
Posted by SpacecowSmith at 18:22 No comments:

I have finished off the Wartorn Planter and managed to take some pictures: 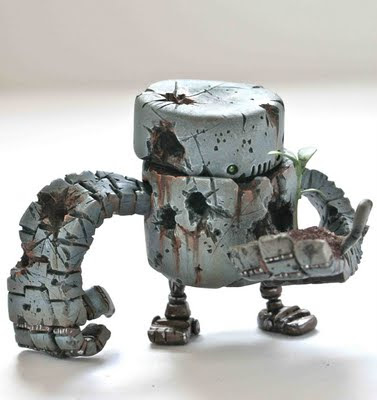 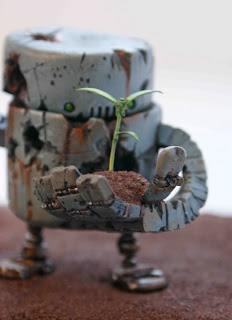 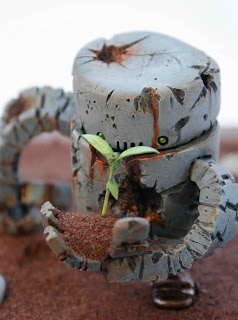 Wartorn Planter Examining the Seedling
The Wartorn Planter is a lonely figure trundling across a landscape devastated by a war and then abandoned. Amongst the desolation the rusty little robot plods along planting trees and flowers in an attempt to return the land to beauty.

Originally designed as a warrior but looked too cute, even after a great deal of shell damage, the robot was reclassified as a robotic gardener.

I am really pleased with how he turned out and the experiment with the new arm design has worked out rather nicely. I have entered him into the Cheltenham Illustration Awards but am unsure how he will fare. Time will tell however, and I did enjoy making the little fellow!

I hope to be able to add pictures of my Hercules maquette next so keep your eyes peeled!

All the best!
Posted by SpacecowSmith at 10:13 No comments:

I thought I would post a bit of a preview of my latest model and showcase the place that I pick up much of my materials from!

First off heres a quick picture of the Wartorn Planter: 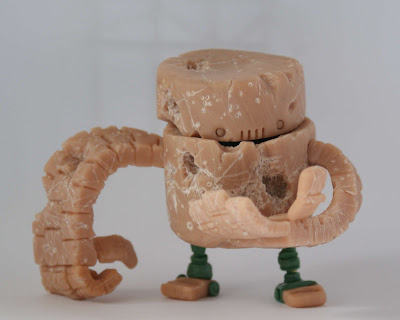 Wartorn Planter Preview
I am planning on entering him for a competition once I have him finished but more on that later.

The main purpose of this post is to showcase the WORCESTER RESOURCE EXCHANGE and the fantastic job they do.

Worcestershire Resource Exchange is a 'scrapstore' which collects clean and safe waste from a range of local industries and businesses, diverting it from landfill. This 'Aladdin's Cave' of low cost reclaimed material is then made available to members as a creative resource for projects.

I found out about them just over a year ago and have been a member ever since my first visit. The sheer range of materials they have is fantastic and I always come away with boxes of useful bits and bobs ranging from fabric to sculpey and slate tiles to cardboard. They really are an excellent source of raw materials for model making.

Most of my maquettes feature materials from the WRE and the Wartorn Planter is no exception as the body, arms and feet all made of sculpey that I bought there!

I would heartily recommend anyone in the Worcester area or beyond to take a look at their site HERE and if you are in the area take the time to drop in. I guarantee that if you are even remotely arty (or have kids) you will leave with a pile of stuff!

Their opening times are 12pm-7pm on Thursdays, 10am-5pm on Fridays, and 10am-1pm on Saturday. You do need to become a member to make the most of the scrap extravaganza but its well worth it!

All the best!
Posted by SpacecowSmith at 09:14 No comments:

The Pirates in an Adventure With Scientists!

Just a quick update with a picture from the upcoming Aardman film, Pirates in an Adventure With Scientists. 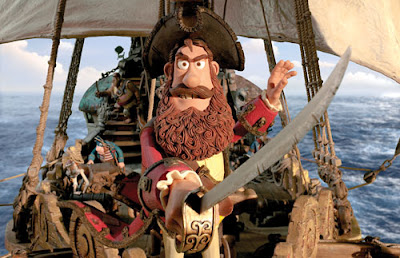 The Pirate Captain and Crew
I am lucky enough to be working on it as a model maker since July last year and have been thoroughly enjoying the experience. Further details on the film itself can be found here: AARDMAN ANIMATION.
Posted by SpacecowSmith at 11:57 No comments:

Heres a couple of pictures of a sculpt I produced for a competition at work. The brief was that you had a space 40mm high by 50mm wide and 22mm deep. You were given two cocktail sticks and a wooden paint stirrer and one more material of your choice.

After a bit of a ponder I made this little fellow: 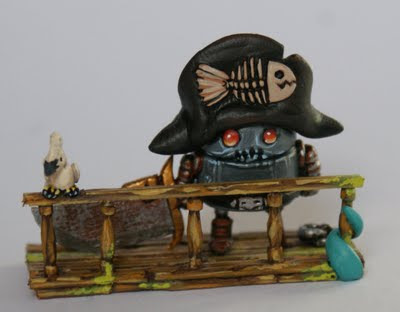 Tiny Rusty Pirate!
Standing under 40mm tall and made from procreate putty the Tiny Rusty Pirate will be getting added to a display in the model making department within the next couple of weeks!

Heres a closeup of the little bird. Hes just under 10mm tall and was lots of fun to make! 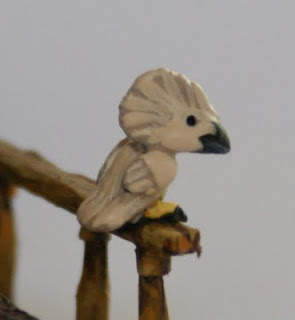 Pretty Polly!
All the best!
Posted by SpacecowSmith at 10:24 No comments:

Heres a couple of pictures of my newest piece. 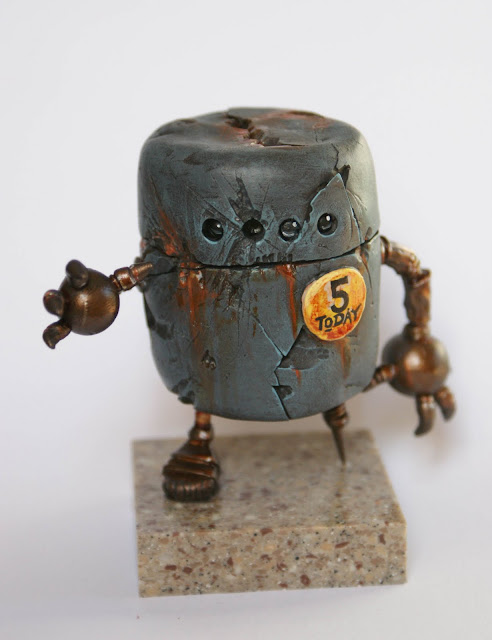 Standing just under 10cm tall, the Rusty Robot two's body was originially built for a university class on mould making and has been sat on my desk covered in plaster and plastecine for well over a month now.

Tired of seeing such a forlorn piece of uncompleted work I decided to finish him off yesterday. I smashed the sculpey body with a hammer, chipped at him with a scalpel and finally glued him back together again to give a nice ramshackle finish. The arms and legs are made from thick aluminium wire, sculpey and pro create modelling putty.

I made the decision to give him mismatched limbs as I like the idea that the little fellow was made from salvaged parts or has been left to his own devices for years and has slowly replaced parts as they wore out.

The addition of the 5 Today badge was paritally to give him a little colour and partly at the suggestion of my girlfriend who thought it would add an element of cuteness to him. I must admit hes a little creepier than my last rusty robot but has a certain charm to him.

I must admit that I am finding making rusty robots rather fun and have several more at various stages of construction which will be getting added as they are completed.

All the best!
Posted by SpacecowSmith at 01:20 No comments: