Just a quick update. I am off on my holidays in Scotland and wont be able to do much in the way of updates here but my work has been featured on TOTUS MEL'S WUNDERKAMMER which is rather exciting! 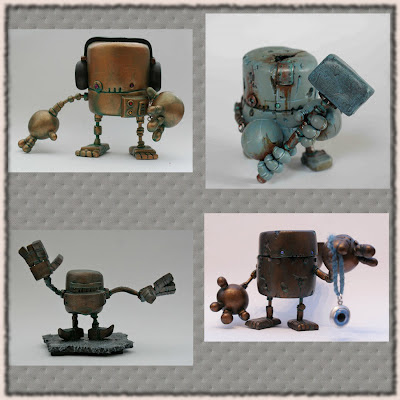 Its a rather interesting blog showcasing some of the more unusual Steampunk inspired arts and crafts that are out there and is well worth taking a look at.

I am actually off today with Amy of STEAM POWERED FISH fame to take some photos of her beautiful models in situ the west coast of Scotland so look for some amazing pictures to be added to her blog soon (if we dont get washed away with all the rain or eaten by midges!)

All the best!
Posted by SpacecowSmith at 01:02 No comments:

A month or two back I made a robotic wedding cake topper for Catherine and Paul and they have kindly sent over some pictures of their truly original wedding! 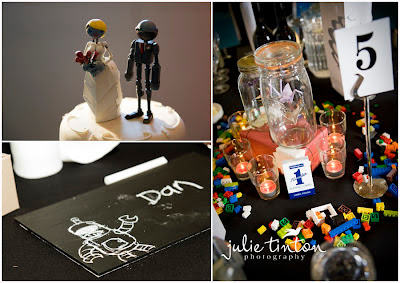 Its really fantastic to see the little fellows in action. HERES a link to their wedding site, its a really original and visually stunning sight and congratulations to Catherine and Paul too for having such an unusual wedding!

All the best!
Posted by SpacecowSmith at 02:41 No comments:

Heres the next of the previews of the robots I will be taking to the MCM in the London at the end of May!

First up theres a member of the piratical Blue tribe! He still needs to get his cutlass, bandana and dapper hat but he's getting there! 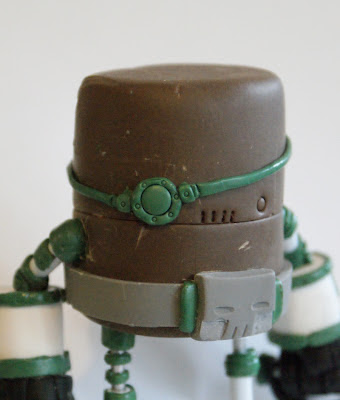 Next up theres one of the ironworking Red Tribe! 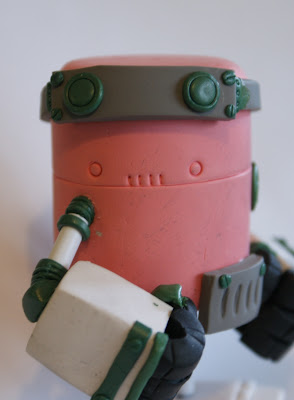 I am also busily working on a Black tribe villain which I will post some pictures of here once hes finished!

All the best!
Posted by SpacecowSmith at 10:22 2 comments:

As promised heres a few previews of stuff I am working on in preparation for the upcoming London MCM!

I will be bringing an assortment of robots with me and thought I would start off with one of the Green Tribe. Hes a bit of a work in progress at present but should be finished and ready to paint by the end of the day! 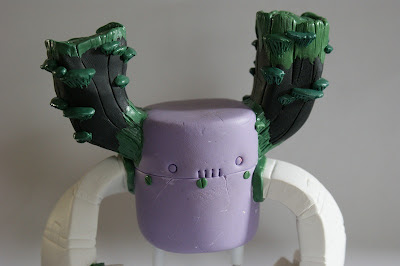 I am also going to be bringing a host of prints and original artwork to sell and heres a preview of the sort of thing you will be able to buy: 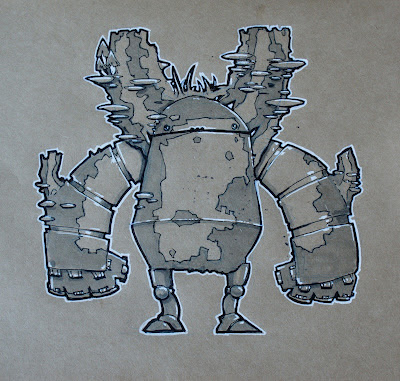 The aim is to get representatives of all the tribes of the Scrapyard made and drawn up so I have still got quite a lot of work to do but hopefully folks will see something they like!

All the best!
Posted by SpacecowSmith at 02:02 No comments:

Just a quick message to say both myself and Amy of STEAMPOWERED FISH will be attending the London MCM COMICON event from the 25th to 27th of May!

We first attended last year and had a great time and hopefully will have an equally successful few days there this year!

I will be taking a host of tiny rusty robot sculpts along with a wide variety of prints and original artwork while Amy will be bringing supercute Quadropii, prints and lots more. If anyones planning on attending please feel free to come and have a chat and peruse our eclectic selection of wares!

We will be posting previews of some of the stuff we are going to be taking so please keep checking back!

All the best!
Posted by SpacecowSmith at 17:23 No comments:

I am having a bit of a promotion over on my ETSY SHOP! Enter the code TINYROBOTSALE2012 for a 10% discount! 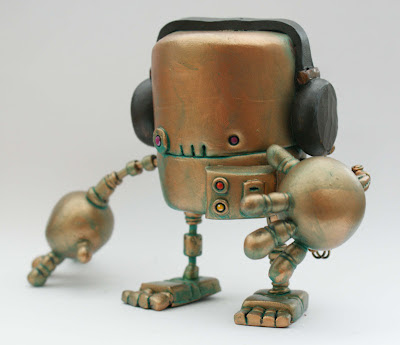 BUY ME!
Posted by SpacecowSmith at 04:13 No comments:

Email ThisBlogThis!Share to TwitterShare to FacebookShare to Pinterest
Labels: Etsy

Heres a few pieces I have been working on of late for my Rusty Robots game:

Red Tribe Forgebots!
The Forgebots have been made with a separate sprue of hands so they can be customised. The first release will give the option of pistols and hammers with future sprues including polearms, SMGs and gimmick weapons. Standing roughly 30mm tall the little fellows have been lots of fun to make and will soon be joined by many more!
Next up theres some designs for some limited edition robots I am in the process of sculpting up: 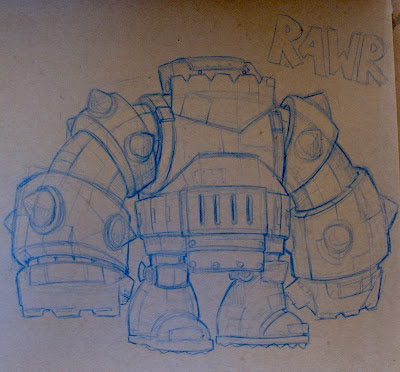 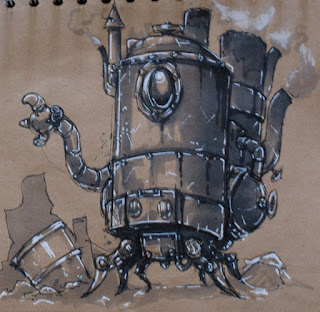 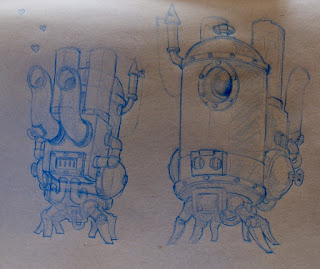 Trade Envoy Final Design
Hopefully I will have the first mould sorted out and ready for casting by the end of this week!
All the best!
Posted by SpacecowSmith at 02:40 2 comments: 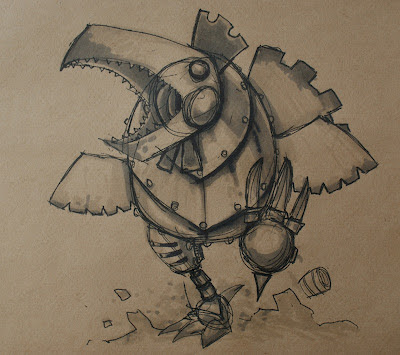 Thunder Chook!
All the best!
Posted by SpacecowSmith at 08:13 No comments:

My Friend from Uni, Jack has started taking commissions for illustration work! 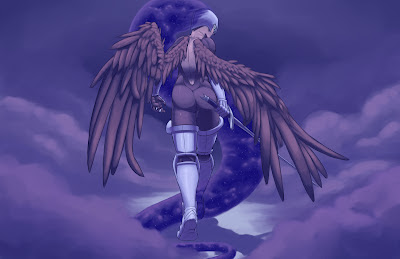 A Cold Dish by Jack Kenny 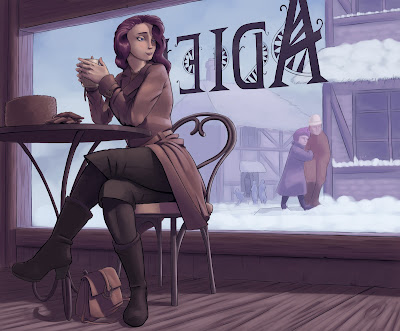 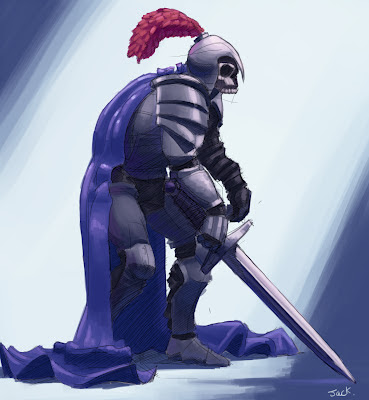 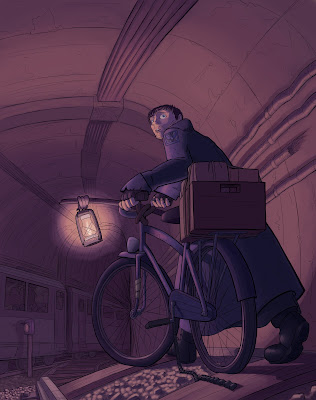 The Best Job in the Metro by Jack Kenny
As you can see he is rather good! HERES a link to his website and I would highly recommend him to anyone thinking of commissioning him as his work is excellent!
All the best!
Posted by SpacecowSmith at 02:25 1 comment:

Heres a quick peek at some of the designs I have been working on for Rusty Robots! 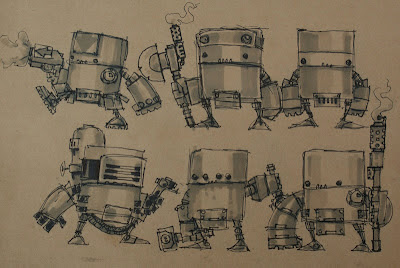 Reds!
Theres a load more over on my RUSTY ROBOTS blog so please feel free to nip over and have a look!
All the best!
Posted by SpacecowSmith at 05:17 No comments:

Heres a very quick page of thumbnails of the poses for the upcoming Reds: 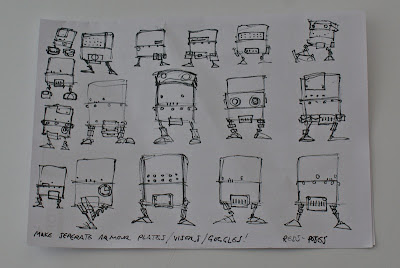 The Reds!
Initially theres going to be six poses using the Mk1 Scrapbot body which will come with a sprue of add on bits like the groin guards and goggles which will hopefully allow folks to personalise their robots to their hearts contents.

Of these poses three will be posed in such a way to allow for hand weapons and pistols while the remaining three will be armed with rifles which will be provided with a sprue of assorted weapons ranging from hammers to scrap pistols and heavier ordinance.

Eventually there will be new additions including specialised robots, leaders and big guys but I want to get some basic robots sorted out first before going for the more complex designs.

I am trying to get these bits and bobs sorted out at present in time for the mould material and resin arriving at some point in the next week or so allowing me to actually get some hand cast prototypes made!

Background wise the Reds are associated with metalwork and the great forges of the Scrapyard so many have goggles to protect their eyes and assorted riveted plates to stop them getting damaged. Their weapons are similarly going to be heat and fire based with a wide variety of hammers and stubby guns, welders and flamethrowers.

I will try and get the bodies ready for show soon alongside their weapon sprues as well as some sketches of the Blues who are decidedly more nautically themed...

All the best!
Posted by SpacecowSmith at 04:24 No comments:

Heres a quick pic of a Jaguar man I developed a while back. 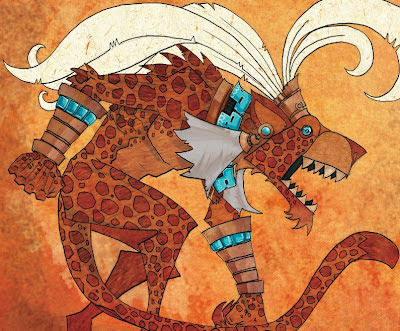 RAWR
Its a bit of a mixed media job combining a hand drawn image with lots of photoshop malarky to get the texture!

All the best!
Posted by SpacecowSmith at 16:05 No comments:

Well its taken ages but I have finally added a Spacecow Productions Facebook page!

All the best!
Posted by SpacecowSmith at 11:35 No comments:

Heres a couple more pages from my sketchbook featuring more robot designs, setting sketches for RUSTY ROBOTS and even an alien girl I have been thinking about sculpting! 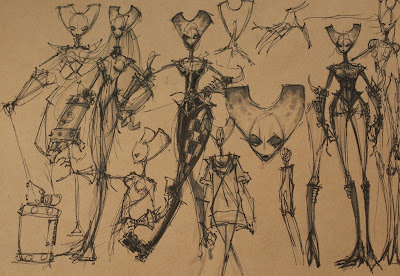 Alien Girl
I quite like the idea of playing around with proportions on her and the strange pipes jutting out of her head. As mentioned already I am thinking about sculpting her but think I need to develop her character a bit first! 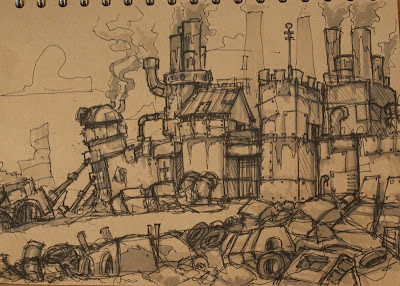 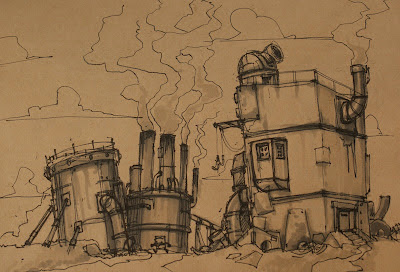 Scrapyard Settlement
I am slowly developing a game setting called Rusty Robots (more information can be found HERE) and wanted to develop some visuals for it so have sketched some typical buildings and settlements that can be found throughout the planet spanning Scrapyard. 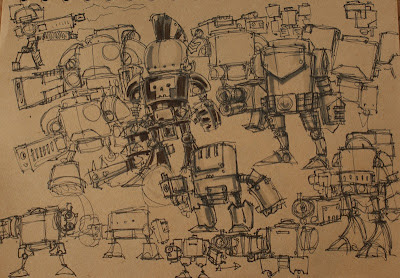 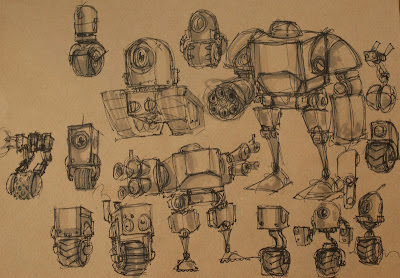 More Robot Designs!
Next up theres some more robot designs, some of which are indeed going to get sculpted! I particularly like the wheeled ones in the second picture which will be seeing action in the world of Rusty Robots!

All the best!
Posted by SpacecowSmith at 03:51 2 comments: